Chocolatey is a CLI package manager for Windows. Chocolatey packages are NuGet packages with added metadata. We use Chocolatey to actually install/uninstall the applications on the computers.

Chocolatey packages contain PowerShell scripts that manage the desired software. It's a very flexible and powerful way to do it, since the scripts can deal with all kinds of checking and tweaking.

Here's the wiki for Chocolatey.

Also take a look at repository.

The challenge with building a good package is to collect the information that is necessary to make the deployment silent, to not restart the computer, close programs, etc. This is a common challenge regardless of the deployment method.

The web portal helps you manage:

Note: clear your browser's cache to get the latest version of the website.

On the start page, there's a "Global settings"-link up in the right section of the page. On that page, you can change the global settings for your server.

Note that if no user has claimed the "Global admin"-role, any user can. This is the first thing to do after setting up your own server, and if you didn't have this feature before you updated to new Deployify server version, this feature will now be added and the same principle applies.

E-mail settings to be able to use the email service.

Here you can add your license from the License portal.

A list of users and their roles. Here you can add the "Global admin"-role to other users.

Each domain has its own space. A domain contains all information, like computers, groups, etc. Domains are isolated from each other. This is to be able to separate for example one company from another, or however you want to separate these. Computers in a domain can communicate with each other (locally) to share packages etc.

Every domain also has a separate computer Installer (MSI) that contains a secret key (pairing key). That key is changed every time a new computer installer is being generated in the web portal, so that a lost computer Installer doesn't work for future installations.

Groups contains a selection of computers, and packages for these computers.

For example, you can:
Name a group “My Office”, add all computers in your office to that group, and add multiple applications to it like 7zip, Adobe Reader etc.

Or, add a group named “Office 2016” and add all computers you want to have Office 2016, and then only add the app Microsoft Office 2016 to that group.

The nice thing with this is that when you later add a computer to one of your groups, that computer will automatically get all the apps that you have added to that group.

For example, if a group package says “Command: Install”, it means that the policy for that package and selected version is to install that package on the computers in that group, when possible.

The schedule will be active between the start date and end date. It will run if the time range and week days are matching the current time of the computer. 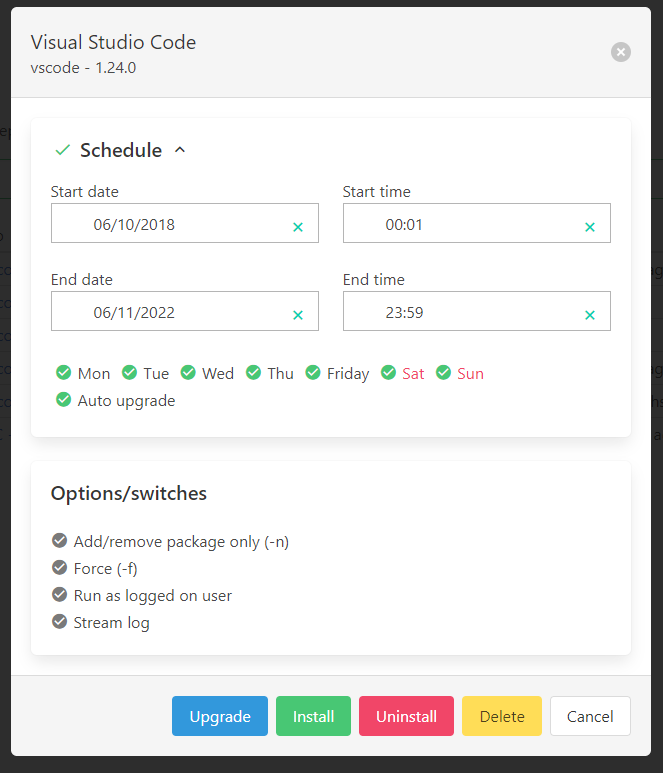 Collects all applications for all computers, and licenses for some applications like Microsoft Windows, Microsoft Office, AutoCAD etc. This was dependent on ProduKey.exe, which was being flagged by antiviruses. Not that ProduKey is unsafe, but it was too inconvenient. Now Deployify has its own implementation of reading the product key of the Windows OS and adding that to the computers inventory.

The website provides a complete list of all installed applications, and applications ever existed since installation of the Deployment client. This is handy if you are reinstalling a computer but lost the license key, or just want to keep track of what is installed on the computers.

Result on VirusTotal for deploymentclient.exe.

It can have some false flags, but that should not come as a surprise as the Deployment client can add a new user (to set itself up), receive remote commands, run PowerShell commands, and so on.

Note that the service password is not stored. We don't know the password and you don't know it. No one does. The local system account could be an alternative, but that is less secure and also doesn't work for some deployments.

The installation package (MSI) contains a pairing key that is generated when you are downloading it from the Web portal.  The pairing key is bound to the specific domain with a chosen expire date. After the MSI is installed on the computer, the service will start and pair the client with the server.

This is a complicated authentication procedure that makes it hard to replicate for bad intentions. Not only for the process itself, but because of the information, timings and other information involved.

Makes sure that Chocolatey is installed.

Synchronizing existing computer software with packages that exists in your package feed(s). E.g. if 7-zip is installed on a computer and exists in any of your feeds, then it will show on the website as installed. This means that you gain control of your software so that you can manage it immediately.

Keeping track of schedules, so that commands are being executed in the desired time window.

This is a beautiful feature that free up your internet connection.

So, as long as the package exist on some computer in the local network, then that computer will be the source for other computers in the same network.

This feature use secure communications and many measures to make sure that the package is the right one, and will only use computers in the same Deployify domain, with local authentication.

This is how to install a package on multiple computers simultaneously (group package).

Note that this feature only applies for the repos that are included in Deployify.

If you are managing applications for multiple organizations, you may not want the organization to be able to access your repo. The URL to your feed can be logged or sniffed when Chocolatey installing packages, but with this feature that's not a problem.

First, the API key is never sent to your computer. The computer generates a token based on information that only the Deployment Client and the repo server has. The token is then baked into the URL that is passed to Chocolatey as a "source". That token is only valid a short time period and only have read permissions. The generated URL can still be used to download packages from the repo but only for a limited time period, and since there is only read permissions, no changes can be made with the generated URL.

It's simply a web service that contains information about packages, where to download them, and the packages themselves. Sometimes it's called a repository, repo, feed or just a source.

Chocolatey doesn't need a package feed, it can install packages directly from a file, or just a folder with package files (.nupkg).

You can have multiple feeds added in the Web portal. This let you access all packages through one portal. The URL to the feed is stored in the Deployify database and pushed to the client on connection. See Repository protection mechanism in the section above.

Deployify provide you with a private and secure package feed automatically when you are signing up, but you can add as many as you want.

There's also a community feed that contains 5200+ packages that is automatically added to your portal.

It's easy to create a new package. Choose a file, fill the form, and then upload. The engine detects fields from the uploaded file, if not, you will get a notice of what fields are missing and get a chance to correct them.

The most important fields are id, version and silent install argument (default is /S).

Easier than creating a package. All fields but the version field is be pre-filled, based on the package are updating.

How to Get Started